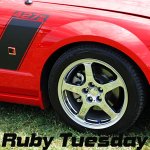 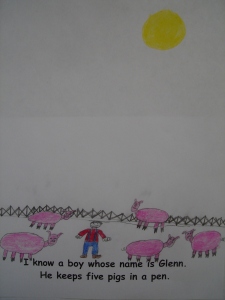 When I discovered that I have two non-readers, A-Girl and D-Boy, in my sixth-grade language arts class, I began thinking of ways to include them as fully as possible in our literacy activities. I decided to have the kids, all of them, play with rhymes and make couplets, because poetry that rhymes is just plain fun. (I can still recite “Eletelephony,” which I memorized when I was in elementary school about 2,000 years ago.)

We spent some time coming up with several lists of words that rhyme, and kept it simple: day, may, way, play, say, etc. Then we experimented with writing couplets. Again, I kept it simple, asking the students to fill in only the last word of a couplet I had created, using the list of rhyming words that we had already generated together. Even my non-readers could copy the couplets from the board and recite them, because the musicality of poetry sticks with your ear a lot longer than pedestrian prose. (Why do you think Shakespeare has lasted so long?)

As an extension of this activity, I decided that we could collaborate and write a book of couplets together. The book I envisioned would contain lots of repetition so that A-Girl and D-Boy would, sooner or later, start catching on to the correlation between the symbols on the page and the sounds we made with our mouths. The book would also be illustrated by the students.

At first, I thought that I’d look at all the students’ illustrations and use only the very best one for each couplet in the book. I quickly abandoned that idea in favor of each student’s making his or her own book, illustrating all the couplets.

Red-shirted Glenn, whom you see in the illustration, is introduced on one page of our book that, when finished, will be twenty-eight or thirty pages long. We hope to have it “published” and ready for the parents to read by Back-to-School Night on the 26th.

So far, the kids are having fun with this writing project—and so am I!

A kid who can’t write her own name
Will not be a part of the game.
She’ll wait on the side,
Morose and dull-eyed,
While others are climbing to fame.

Posted in illiteracy, my limerick

There are usually always some shocks in the first few days of school. For example, I’ve discovered that I have two sixth-graders who can neither read nor write—and they are not English Language Learners.

Monday I asked my sixth-graders to draw a picture of a person. First, they were to write their names on one side of a clean, white sheet of paper, and then draw an oval with ears. Then they passed the paper on to the next person, who added eyes and eyebrows. After the paper was passed again, the next student added a mouth. After one more pass, hair and other finishing touches were added. (Since I forgot to mention a nose, there are at least two noseless portraits hanging on the board.) I gave the kids crayons and let them color the pictures for about five minutes. After coloring, the pictures were given back to the student whose name was written on the back.

“This is a picture of a new student to our school,” I said. “How does he or she feel today? Is he scared? Is she angry? Does he wish he hadn’t come? Is she having a great day? Give your student a name, and then write his or her first-day-of-school story.”

I gave each student a fresh sheet of lined paper and told them they had to write a half-page story—all the way to the second punch hole in the paper. After fifteen minutes, I collected the stories.

One of them began: “This is Ben he has a Big face.” The story concludes with the observation that Ben is a friendly guy: “He like to smill at any dody” [He likes to smile at anybody].

In other stories I met Bob and Tonya and Ed.

But I became concerned when, after fifteen minutes, the only thing that A-Girl had written was “Boy has a nme”—which I took to mean “The boy has a name.” That was her whole story. Except for her name and the date, there was nothing else on the page.

I became even more concerned when I read D-Boy’s story, a half-page that looked like this:

I have copied D-Boy’s story “word” for “word.” It looks like some arcane language. Yet even Gaelic, which I cannot read, looks more comprehensible than D-Boy’s work. Why are students moved through five or six years of school without being able to read or write? Do you see why I’m concerned?

Let me hasten to say that I am not blaming any of D-Boy’s previous teachers. I am, however, saying that there should have been some heavy-duty intervention for this child years ago. It isn’t fair that he has landed in middle school without even being able to recognize basic sight words.

Can I do anything to help D-Boy and A-Girl learn to read and write between now and the end of the school year? I don’t know—but I’m about to find out.

What an adventure this year is shaping up to be!