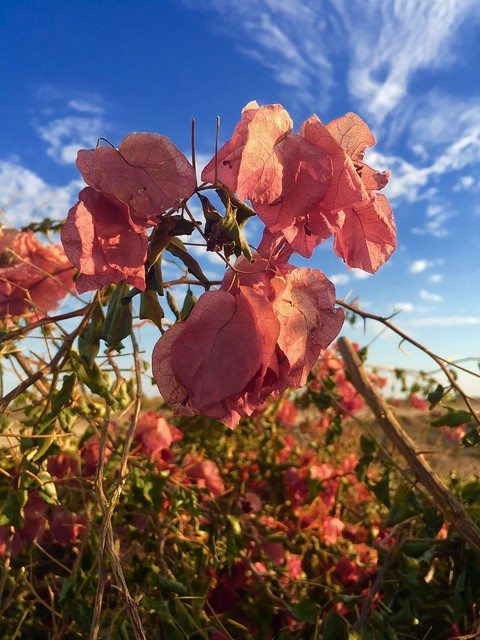 Fading bougainvillea blossoms have been tossed on a trash heap in Wellton, Arizona.

Can I truly celebrate
When the brilliant blossoms fade?
Can this heart of mine rejoice
When such folly is displayed?

Yet even as they’re fading,
And although they cannot sing,
The blossoms clearly show me
Life on Earth’s a fragile thing.

Somewhere is better than nowhere, grinning is better than grim;
Bourbon is better than bibles, but nothing is better than Jim.
He’s the old guy with the bedroll, who’s had a hard knock or two;
He sleeps in a rusty wheelbarrow, parked every night at the zoo.
Jim hasn’t a care in the world, though ashes cover his beard,
And all the grownups who cross his path think he’s completely weird.
But children think Jim’s a wonder—he teaches them letters and sums,
And never asks for a penny, and lets them pound on his drums!
The children all think that Jim’s tale is something that ought to be told,
So here’s to all the Jims of the world, who cannot be bought or sold!

I lost a little button, no bigger than my thumb,
High and low I called to it, but it would not come.
And then one day I found it, lying at my feet;
It had been there all the time—my relief was sweet!

What Is the Price?

What is the price of a bucket of rice
Found in the market at dawn?
If you don’t pay it—how shall I say it?—
You will be sad when it’s gone.

What is the cost of a salad that’s tossed,
And dressed, and ready to eat?
You think it tastes good? Then I think you should
Crunch it along with your meat.

How much will you pay for a bale of hay
To feed to your sheep and goats?
Remember, my dear, as winter draws near,
That horses are fond of oats.

The price that you pay, I think I should say,
Is what something’s worth to you;
So open your purse, things could be much worse,
And pay for your Starbucks brew!

Ditty on the Cusp of October

Tenth Month comes, and none too soon;
Ninth Month shrivels like a prune.
Of the “-ber months” I can say:
Oct’s the best in every way!

We Strained the Honey

We strained the honey, it flows like light
On our bread’s darkness; we take a bite,
Lost in the glorious mystery
Of wilding sweetness that sets us free.

How precious to set aside our shrugs
Of unbelief and squash them like bugs!
Minds that are closed can open anew;
Eat of our bread now—we break it for you.

The last words she spoke were dark, they were grim,
Not words from a psalm or even a hymn.
Nothing about them seemed hopeful or kind.
(Was the poor woman quite out of her mind?)
Her last words were these (I tell you no lies):
“Just let the crows come and peck out my eyes.”

I did what she asked, and let the crows eat
Both of her eyeballs—a savory treat.
I’ve thought of her fate for many long years;
When I remember, I shed bitter tears.
Now crows are coming for my eyes as well;
Pecking hungrily, they’ll sound my death knell.

Phoenix, Arizona keeps burning, and the heat
Is brutal on the brains, and murder on bare feet.
(It’s slightly less oppressive from midnight until dawn.)
God help us all, and keep us, till summer’s heat is gone!

Flee From the Kitchen

Flee from the kitchen, live on the porch;
August is glowing hot as a torch.
Cover yourself with rags or with strips,
Drink from a bucket, smacking your lips.
Dream of crisp apples, cinnamon toast,
A knife too dull to carve Sunday’s roast.
As the Earth turns and takes you along,
Make up a ditty, sing a new song!